Divorce. Nobody wants to imagine that it will happen to them but you need to be prepared for the event that it does. While the divorce rate is decreasing in America, about 15 out of 1,000 marriages ended in divorce in 2019. If you have children while you are trying to separate from your partner, then child custody is another issue that you are going to have to deal with when it comes to divorce. However, there are several different types of child custody available.

What are the main ones that you need to consider? This is your guide.

Sole custody is the type of child custody that will give one parent the most amount of power over the other parent. This is usually given to a parent if another parent lives a great distance from where the children are currently living, if one is legally defined as abandoning the children, if they suffer from a mental illness, or even some type of abuse.

While there are ways for parents to receive full custody, there usually needs to be significant proof that one parent is unfit to raise their children. However, parents also have the option to give up their parental rights and award the other parent full custody in doing so.

Under this system, the parent with sole custody has the children full time and there usually needs to be special arrangements for the other parent to get visitation rights.

Primary custody (or physical custody) is slightly different than sole custody because, in this scenario, both parents still have legal rights to the children. However, this system awards one parent the vast majority of these rights.

Under this system, primary custody could be one parent having the kids five days a week and then the other parent gets weekend rights. This could be less frequent but one parent could also be forced to pay child support to the other.

Finally, joint custody is arguably the most friendly child custody deal for both parents. Under this system, both parents would get equal or close to an equal amount of time with their children.

An example of this type of deal could be one parent getting four days a week and the other getting three days a week. Then, they may switch the number of days the next week.

Another scenario could be one parent getting the kids one week and then giving the kids to the other parent the next week.

Find Out More About Different Types of Child Custody

This is just a brief guide to explaining the different types of child custody. Knowing these are a good start, but you still need representation to make sure you get what you desire.

Contact Crosson Richettti & Daigle to find out what your options are. If you’re seeking custody of a child that isn’t yours, you need to know how to approach it.  Whether the child’s parents are...

What You Need to Know About the Child Adoption Process

LGBT Divorce in Pennsylvania: Everything You Need to Know 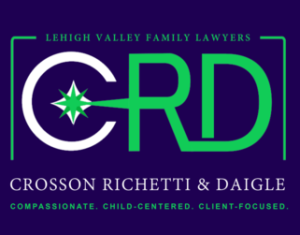